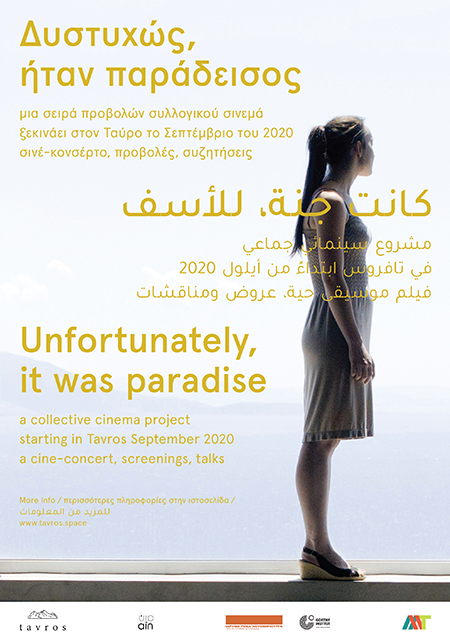 Showcasing movies ranging from fiction to documentary or experimental films, and a cine-concert, the films screened will share thematics such as exile, fast industrialization and resistance. Each session will be diverse in form and format, with two films from each respective geography that will mirror each other as they approach topics relevant to daily life, its joys, struggles and solidarity. The project aims to create a conversation regarding commonalities from both sides of the Mediterranean.

Tavros takes its name from a mountainous region between Turkey and Armenia from which a wave of migrants arrived and settled in the 1920’s. In one century, the broader neighborhood has had several urban and social transformations: from Asia Minor refugee settlements to slaughterhouses, fast industrialization, development of an exploited working class that led to class struggles.

The screening program will present Greek, Middle Eastern and North African films which will mirror each other as they approach similar topics responding to both the history of Tavros as well as its inhabitants. The thematics will cover issues related to newcomers that formed – in Tavros as everywhere – an available workforce, but also female workers’ struggles, citizens’ protests to protect the environment against predatory practices, industries and factories as well as labor movements which unite to organize for better living conditions and social justice.
In politically and socially hectic times, from the militant cinema of the 60s till today in Greece and in the Arab world, filmmakers have aimed to reveal subaltern histories, workers and strikes which were purposefully not covered by the media. Diverse in form and format, showcasing movies ranging from fiction to documentary or experimental films, and a cine-concert, the films selected are of contemporary filmmakers but also pioneers whose films are part of our cinema heritage. Indeed, the artistic field of cinema is historically connected to the world of labor. Whether through fiction or documentary films, work, workers and their class have given rhythm to the history of cinema.

TAVROS, locus athens’ new art space, will be the core host of this program while in the summer months, screenings will be held in public spaces located around the main venue in partnership with the municipality of Tavros.

AIN in collaboration with locus athens will invite filmmakers, artists, curators, activists, to respond and reflect on each screening either through texts, visual essays or online conversations. These “Correspondences” will create a framework for the screenings and allowing for multiple readings interspersed in time.

With the support of Rosa Luxemburg Foundation and Goethe-Institut Athen and under the auspices of the municipality of Tavros Moschato.

*the title was borrowed from selected poems by Mahmoud Darwish