"Cairo Station" by Youssef Chahine (1958, 74 min, Egypt), a cine-Concert with a new soundtrack composed and performed live by Yorgos Stavridis, Yorgos Stenos and Yorgos Mizithras.
"Chahine himself stars in this melodrama of poverty and sexual frustration that shocked Arab audiences in the 1950s. The filmmaker is remarkably effective as a crippled news vendor who lives alone in a squalid, pinup-lined shack and whose obsession with a beautiful young lemonade stand vendor leads inevitably towards violence. One of the decisive turning points in Chahine’s long career, "Cairo Station" marked a new visual daring and embrace of ambitious and controversial subject matter. The film is an attempt to rejuvenate a formula-driven mainstream Egyptian cinema by judiciously adding formal and thematic elements from both neo-realism and German expressionism." (Harvard Film Archive)
Nowdays, considered a classic of international cinema, "Cairo Station" pays tribute to the golden era of American musicals. To highlight this musicality, we have invited Yorgos Stavridis, Stenos and Mizithras, normally collaborating as members of the band Trigger Happy, to use their sonic experimentations to perform a new soundtrack for the movie. 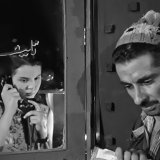 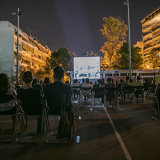 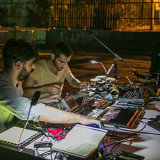 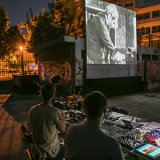